CeeC who also signed a contract that has expired with Sapphire scents was also allegedly not in good terms with the brand until her contract expired. 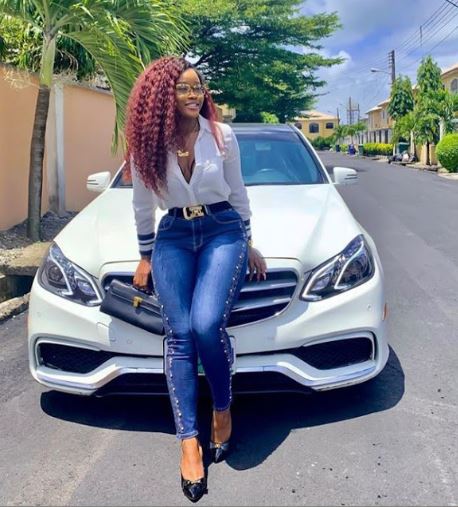 These are not the best of times for BBNaija star Cynthia Nwadiora a.k.a CeeC.

According to confirmed insider whisperings,the reality star has fallen out with all those who made her a brand Ambassador because of her attitude…

SDK Sources say ”CeeC has fallen out with MizNwanneka the hair boss and even though her contract is not yet over,the chummy relationship in the beginning is no longer what is used to be. The reason for the fall out is tagged to CeeC’s attitude to Business.

Insiders inform that the N5million hair deal signed by CeeC and Royal hair deal fell to pieces on the same day he handed her a white car which went viral Online. He is reportedly patiently waiting for the contract he signed with her to be over so that he can quietly take back the car she got as brand Ambassador.

I asked the source why the car would be taken back and i was informed that the car was not gifted to her but comes with the period of Ambassadorship and contract says it is not hers.

CeeC who also signed a contract that has expired with Sapphire scents was also allegedly not in good terms with the brand until her contract expired.

The Brouhaha allegedly started from when CeeC and Tonto Dikeh were flown to Dubai for a photo shoot in early 2019….Details of brouhaha not given but source says ”Stella confirm what really happened from Tonto Dikeh”

I chose not to because another source says Tonto will not utter a word out of Loyalty. Eye wear Brand House of Lunnettes according to the sources has also fallen out with the reality star and vowed not to work with her again even though her contract may still be running…

The Insiders also allege that once when CeeC and her other reality friend were approached for Ambassadorship deal,CeeC allegedly said she would not be sharing the spot with anyone and the person was dropped.

Unless of course this story embarrasses them and they want to shame me by renewing ….LOL

Everyone cannot be wrong at the same time,please change your business attitude CeeC:

This post deserves a right of denial from all parties but i am taking my story to the Bank.

Chike To Release “Dance Of The Booless Vol. 1” In June, First Single Due Next Week – |

#BBNaija: ‘I will pay N1Million for any boutique to send clothes...

Mr HyP3R - June 29, 2019 0
Rapper MI Abaga has reacted to a recent interview granted by Timi Dakolo‘s wife, Busola Dakolowhere she claimed she was raped and disvirgined by Pastor Biodun Fatoyinbo...