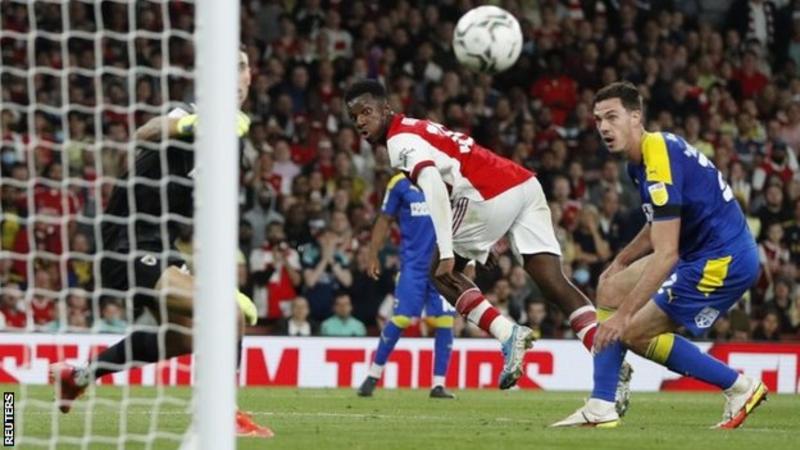 Arsenal beat League One AFC Wimbledon to reach the fourth round of the Carabao Cup and make it three wins in a row in all competitions.

Alexandre Lacazette was making his first start since April and scored a penalty after Nesta Guinness-Walker fouled Gabriel Martinelli.

Arsenal host Leeds in round four.

The Gunners should have beaten the Dons by more after hitting the woodwork twice.

Visiting goalkeeper Nik Tzanev tipped the ball onto his own bar in the first half, and Nuno Tavares later headed off the post.

The Gunners named a strong team, with Nketiah the only member of the starting XI not to play in the Premier League this season.

AFC Wimbledon did not manage a shot on target in the game.

“Competition brings the best out of you when you have difficult moments and the boys have managed to win three games in a row.

“Credit to how they have handled the situation and now they are obviously looking forward to play on Sunday in what is our biggest game of the season [at home to Spurs].”

AFC Wimbledon boss Mark Robinson: “Obviously it [the opener] was a disappointing goal to give away.

“After that we recovered well and I think we had a really good spell for 20 minutes in the first half where we kept the ball really, really well. We possibly didn’t carry enough threat in key areas.

“It was important we came here and tried to be what we are. We want to be a possession-based side so I think it was really key we came here to be a version of ourselves and we did that.”